Weingarten speaks on the future of public education

In a Jan. 9 speech at the National Press Club in Washington, D.C., AFT President Randi Weingarten juxtaposed two approaches for education that would have vastly different consequences for America's students: either build on the bipartisan consensus of the Every Student Succeeds Act to provide all families with access to great neighborhood public schools, or promote the dangerous, destructive approaches that Donald Trump's education secretary nominee advocates to undermine and privatize public education.

"It's our obligation, as a society, to provide all families with access to great neighborhood public schools," said Weingarten. "The Trump administration can follow the will of the people and walk the path laid out by Congress a year ago. Or they can follow the destructive dogmas of the past and reignite the education wars." 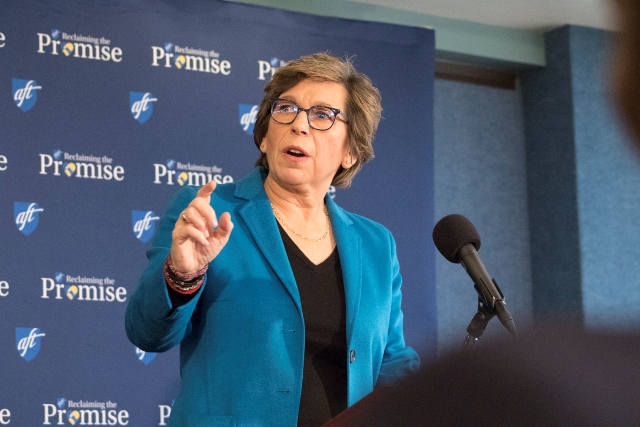 Ensuring the well-being of all children is of vital importance; to do so, we must confront the reality that half of all public school students live in poverty.

"Poverty is not an excuse for low expectations," Weingarten said. "It is a reality that must be acknowledged and confronted."

An effective way to confront the effects of poverty and support children's well-being is through community schools—neighborhood public schools that meet students' academic, enrichment, social and health needs by coordinating partners and resources.

The Community Health Academy of the Heights, in New York City, is an excellent example of how to do this, Weingarten said. CHAH offers an array of supports—including mental health counseling, a food pantry, a parent resource center and a full-service health clinic that is open to the community. A variety of indicators, including large gains in academic achievement, show that "great results are possible when you focus on the well-being of the child, the child's family and the child's community."

She said the path to accomplishing those goals is through powerful learning—learning that engages students; encourages them to investigate, strategize and collaborate; and helps them build initiative and agility.

Powerful learning can take many forms. Weingarten cited examples of engaging project-based learning: students in New York City who planned and conducted a mock trial of a participant in the Rwanda genocide, and students in Corpus Christi, Texas, who investigated the potential for humans to live on other planets. And she detailed several innovative career and technical education programs that not only deeply engage students but develop skills and knowledge they can use in the world of work.

Becoming an accomplished teacher takes time and support, Weingarten said. "Building teachers' capacity begins long before they take charge of their own classrooms, and it should never end."

Weingarten cited two approaches to develop teachers' skills—one focused on developing prospective teachers' skills before they have their own classrooms and the other spanning teachers' entire careers.

The San Francisco Teacher Residency program offers teachers in the city's highest-needs schools a yearlong residency alongside an accomplished teacher. The program has led to higher teacher retention and a teaching corps more reflective of the community it serves.

In her remarks, Weingarten said, "Building capacity is a shared responsibility. And unions are a crucial partner. AFT locals use their advocacy and collective bargaining to help teachers continuously hone their craft and build our profession."

In addressing teacher tenure and evaluations, Weingarten made clear that the AFT "has worked with willing partners to ensure that tenure is neither a cloak for incompetence nor an excuse for principals not to manage—but a guarantee of fairness and due process." And she stated that "far from being against evaluations, the AFT has fought for evaluation systems that support both teacher growth and student learning. That's why we fought for ESSA to end federally mandated, test-driven evaluation. And that's why we support locally driven evaluations with multiple, meaningful measures."

Weingarten said that evidence and common sense show the value of teachers' collaboration. Collaboration is the glue that holds everything together, she said, and she called for broader collaboration—schools with parents, educators with administrators, and schools with community partners.

She contrasted such approaches with school "disruption"—mass firings, school closures, and district or state takeovers. "These approaches are disruptive all right," Weingarten said. "But they are not effective—especially when it comes to improving student outcomes."

Weingarten cited examples of "quiet successes," such as those in the ABC Unified School District in the southern suburbs of Los Angeles. The school district and teachers union have an "intentional and purposeful collaboration to improve their schools," she said, "that has contributed to strong and sustained gains in achievement, particularly for Latino students, African-American students and students from low-income families."

Weingarten expressed hope that the overwhelming bipartisan support for the Every Student Succeeds Act has "quelled the education wars and enabled our shared attention to turn to what works—collaboration, capacity building, powerful learning and the well-being of all children."

Describing a "new education federalism," Weingarten said the "frontier has moved from Washington, D.C., to state capitols, districts and school communities. This doesn't mean that the federal government has no role. We still need it to promote equity by funding schools that serve disadvantaged children and protecting the civil rights of all children."

Betsy DeVos and the attack on public education

Weingarten said Betsy DeVos is "the most anti-public education nominee for secretary of education in the history of the department" and lacks the necessary qualifications and experience to be the nation's top education official. "DeVos hasn't taught in a public school," Weingarten said. "She hasn't served on a school board. She never attended public school—nor did she send her kids to one. She's a lobbyist—not an educator."

DeVos worked in Michigan "to undermine public schools and to divide communities," Weingarten said. "And now she's poised to swing her Michigan wrecking ball all across America."

Weingarten detailed some of the destructive education policies DeVos has lobbied for and poured millions of dollars into: a school voucher initiative that voters rejected by more than a 2-to-1 margin; the vast expansion of for-profit charter schools; negligible oversight for charter schools; and allowing failed charter operators to open more schools.

"What is the result of all this? Student performance has declined across Michigan," Weingarten said. "Nearly half of all its charter schools ranked among the bottom of American schools."

A challenge and an invitation

Weingarten laid out a challenge to DeVos, if she is confirmed. "I extend both a challenge and an invitation to Ms. Devos: Spend some time in public schools," Weingarten said. "There is no substitute for seeing firsthand what works so well in our public schools, or for seeing the indefensible conditions too many students, teachers and school staff endure."

"Come to rural McDowell County, W.Va., the eighth-poorest county in the country, where many voted for Donald Trump. A county where the AFT is leading a public-private partnership to improve the public schools and health outcomes. Join me at Harvest [Collegiate High School], or CHAH, or Toledo Technology Academy, or in Meriden [Conn.], Corpus Christi [Texas], California's ABC district or Miami. Spend a day or two in a class for severely disabled students. Before you try to do what you did in Michigan to the rest of the country, see firsthand the potential and promise of public education."

We are prepared to take a stand

Weingarten said that if the Trump administration chooses to reignite the education wars, "communities across this country will stand up and defend their public schools and our children—like hundreds of thousands have done so far in open letters and petitions, and like AROS [the Alliance to Reclaim Our Schools] will on Jan. 19. Whatever this new administration does, we will be walking the walk for great neighborhood schools by investing in and supporting the four pillars I've described today."

Read more about the examples of successful schools.